“The Masonic Temple of Philadelphia, or as it’s properly known “The Right Worshipful Grand Lodge of the Most Ancient and Honorable Fraternity of Free and Accepted Masons of Pennsylvania and Masonic Jurisdiction Thereunto Belonging,” is an astonishingly lavish building. In 1873, the New York Times described it as “the largest, costliest, and most magnificent structure consecrated to Masonry in the World.”

Last Thursday, I walked to the Masonic Temple of Philadelphia for a tour of this amazing building. Whilst living in Philadelphia for a year, I never made it to the temple despite having known about it for years. In the middle of the afternoon, after a long stroll down Market Street in Philadelphia, after visiting The Dream Garden, I came upon the temple, walked inside and spoke to the man at the desk about taking a tour. He gave me a deal, telling me I looked “studious” and sent me down a long hall to the left to wait for the 3pm tour. I sat in a lavish waiting room whose walls were lined with portraits of Grand Masters, old and current, leather couches, leather chairs and paintings of family life gilded in gold. At 3pm, a young man with a dark beard walked in and told me I was the only one in the tour group. His named was Seamus, and later I learned that he had graduated from U Arts the year before with a degree in film, was more interested in writing poetry, and since he was a mason from the age of 18, the temple hired him when no one else would. He is a docent and general helper around the temple.

Following are many photos of the temple, which, to date, is one of the most amazing, weird, tacky, beautiful, stunning, overwhelming and bizarrely decorated places I have ever been. You should know that one commercial artist (a Mr. Herzog) was responsible for almost all of the design of the building, and himself painted all the paintings while commissioning others to do the plaster work. When he started decorating the building around the turn of the 20th century, all the walls were bare plaster. As you can see, by the time he was finished, not an inch had been neglected of fanciful, precisely-themed decorations.

This room was modeled after Spanish-Moorish temples. The artisans who decorated the temple traveled for three months to various locations and learned how to reproduce elements of specific, themed designs.

All the electric chandeliers were originally gaslights 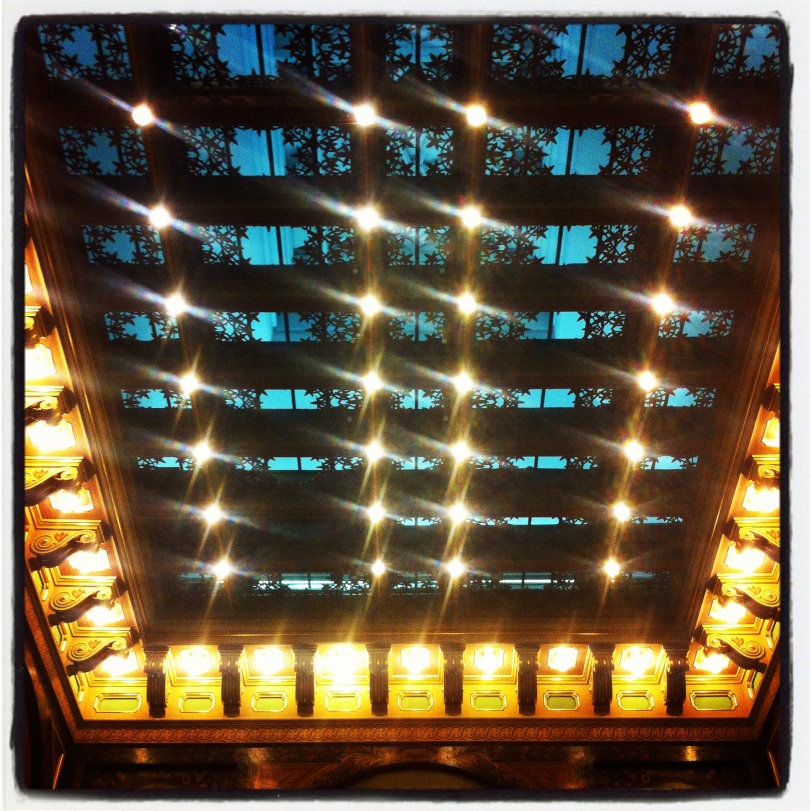 Ceiling in a hallway between rooms. 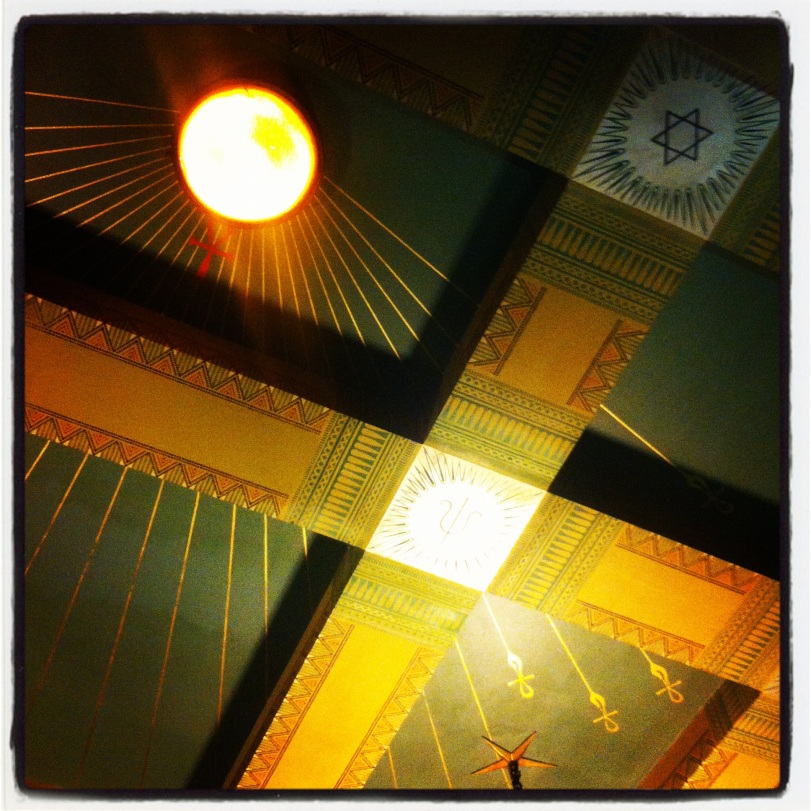 The ceiling of the Egypt room comes complete with the Sun

Modeled after Norman cathedrals in England

Room whose name I have forgotten 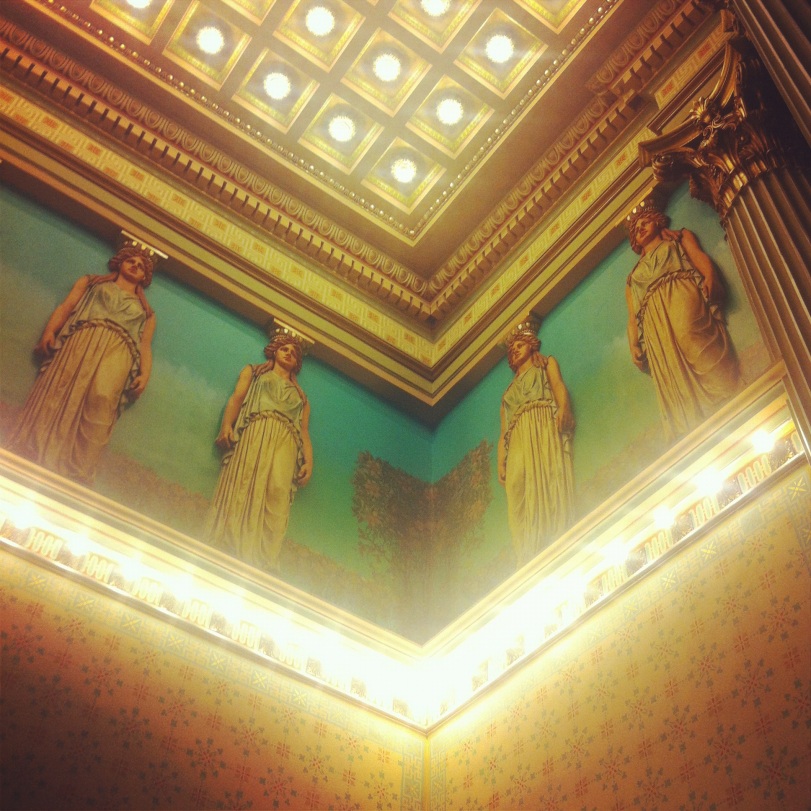 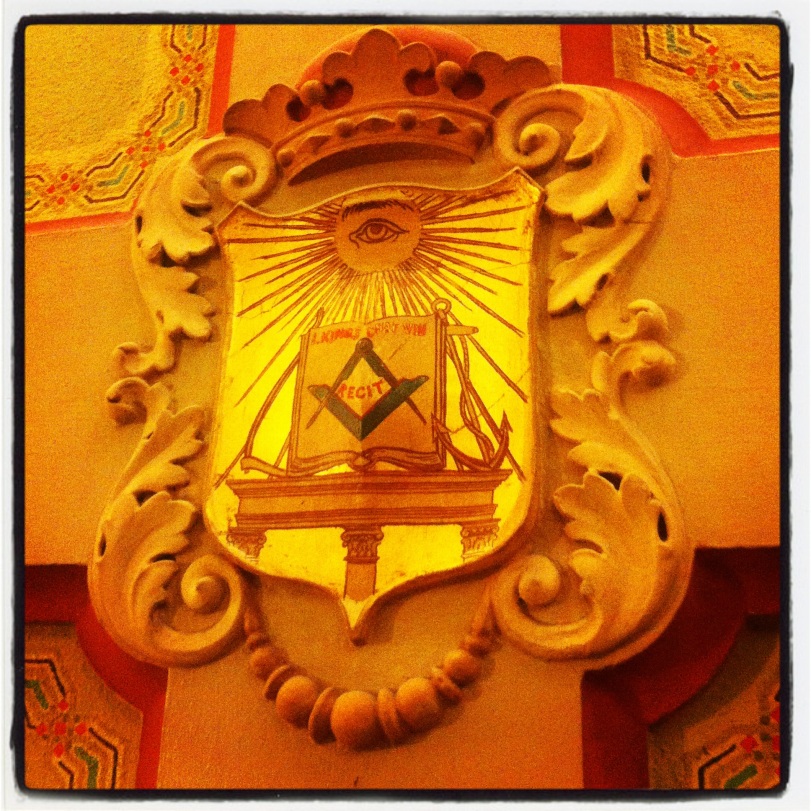 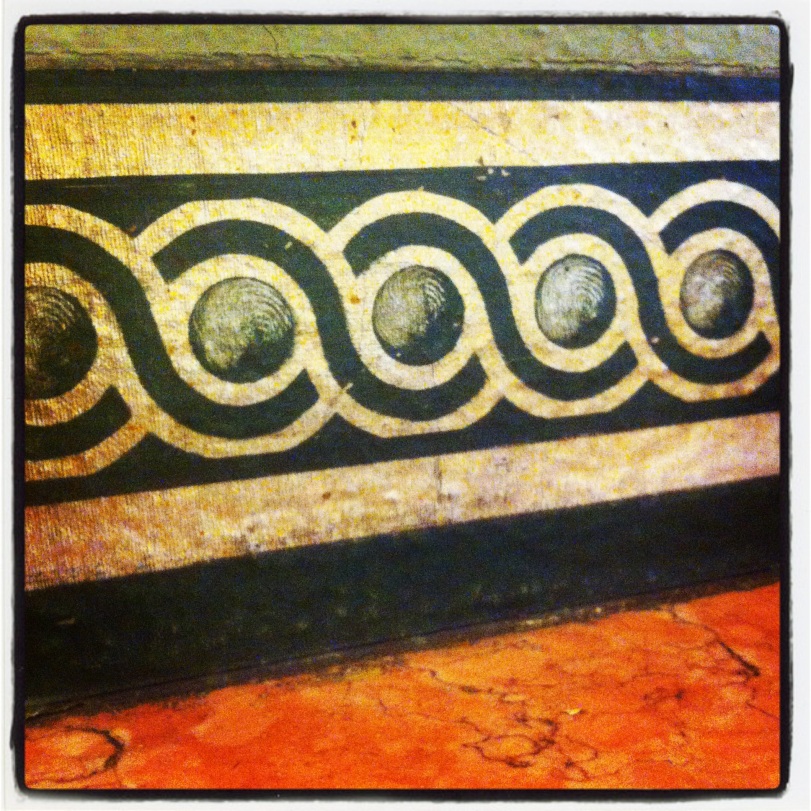 My favorite aspect of the temple was in the center, on the 3rd floor. These circles were painted just before the temple’s completion, and each person who worked on the decoration of the temple dipped his thumb into gold paint and fingerprinted his thumb onto the wall.

Philadelphia may have its faults, but one of its greatest attractions are the many beautiful, old buildings that dot Center City. Philadelphia’s history is fascinating, while its contemporary status is nothing short of tragic. If you find yourself wandering the streets of Philadelphia, be sure to add the Masonic Temple to your itinerary. And say hi to Seamus, from me.