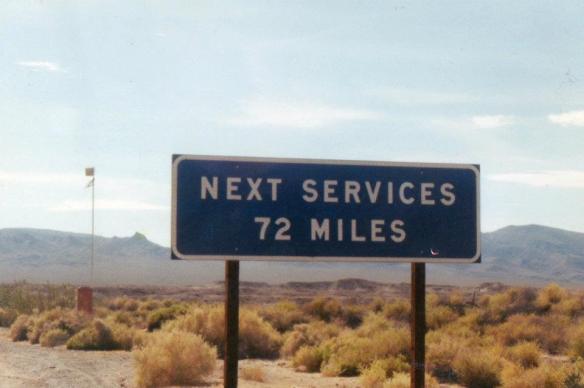 When I was 19 or 20, I have forgotten which, I went on a long road trip with a college boyfriend out west, from Austin all the way to Washington state and back. We traveled through New Mexico, Arizona, Utah, Nevada, California, Oregon, Washington, Wyoming, Montana, Idaho, and Colorado all in a blue Ford Taurus that looked a little more worse for wear when we returned two months after we had left.

A highlight of this trip was our stop at the Grand Canyon. Previous to a random stop in Pecos, Arizona, town of art and college students, we were, like everyone else, going to stop at the South Rim of the Grand Canyon, walk along the plexiglass bridge and marvel at the sights alongside throngs of other tourists. In Pecos, we stopped in a cooperative art gallery and I started chatting with the man working the gallery that day and he told us we should go to the Toruweap entrance instead, and so, we did. 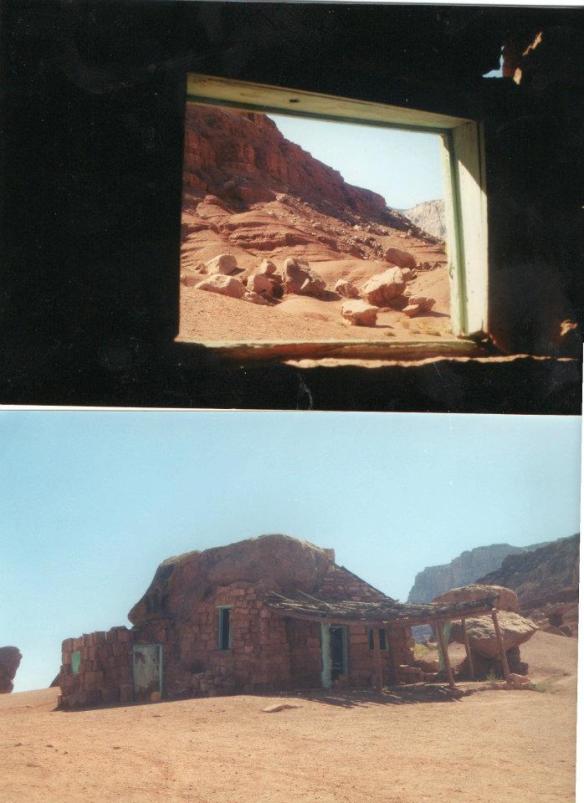 The Painted Desert, on the way to Toruweap

Toruweap is a hidden entrance to the Grand Canyon, one accessed by driving up into Mormon country and knowing where you are going because no one will give you directions. After a few turns here and there, you end up at the bottom of a valley with a very large sign at your right telling you the road ahead is 65 miles long and only suitable for all wheel drive vehicles. We pressed on in the Taurus, and two and a half hours later, arrived at a ranger station. We were allowed in and proceeded to drive along huge, flat slabs of limestone on our way to the rim of the canyon, at which point we parked and set up our tent, and walked to the edge of the canyon, realizing that we were the only ones there.

One of my first memories of the Grand Canyon campsite was looking around and noticing the largeness of that place. Later in the day, I walked through rattlesnake infested terrain, over rocks, and sat on the edge of the Grand Canyon, looking down. At that time, only the two of us were there and we were able to experience the Canyon in a way that most people do not: it was immense, many-layered, radiating with heat in the summer sunshine. I sat there a long while pondering how deep it really was, and how I could get down there, and what would happen if I were to fall?

That night we lit a campfire and stared at the stars, thinking about the monstrously huge cliff’s edge only a few feet from where we sat. In the morning, we woke up and went walking around, looking for strange rocks and plants, narrowly missing a rattlesnake, until we saw a small, white Toyota truck with a Utah license plate parked next to one of the picnic tables.

Walking up to the truck (we had already learned to just say hello to other folks on similar journeys to ours), we saw an old man with a long white beard, eating cantaloupe and drinking black coffee, reading Harry Potter and the Sorcerer’s Stone. Now here was an interesting character, who we learned had driven in late last night for the evening and was about to head home. We sat and shared cantaloupe and coffee, and talked about the world, and traveling, and quickly said goodbye to take off to our next stop: Arches National Park in Utah. 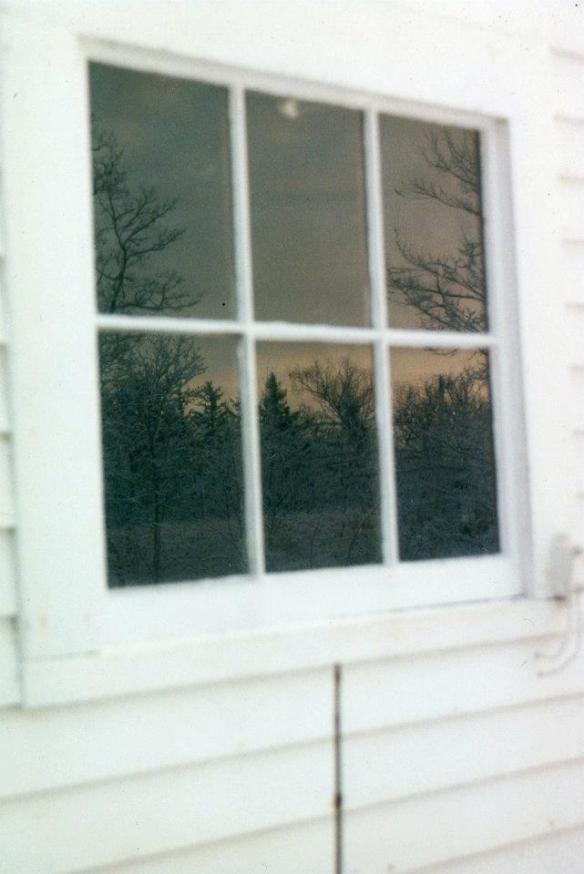 That trip was many years ago now, in fact it was something like twelve summers ago. If I look outside my window today, I see fog and dreariness: the markers of Maine spring. When I was a child, we would arrive in Maine every May and every time we pulled up the driveway of our camp house, with a grocery bag of chicken pot pies, tea, and who knows what else, it was always raining. My memories of Maine in late spring always involve fog, cold, and greyness. 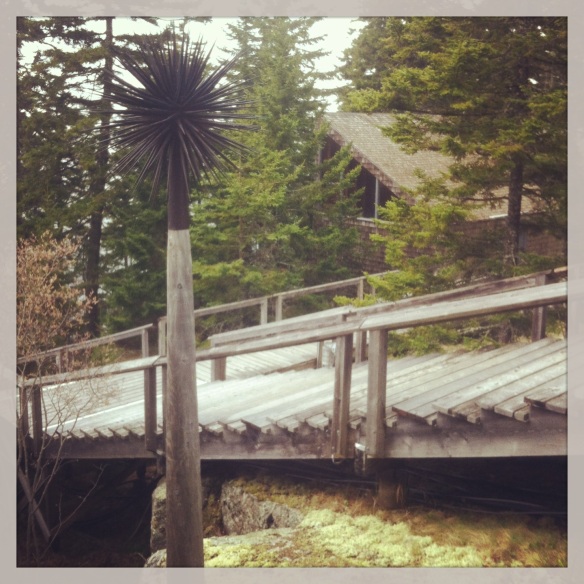 Sculpture and steps outside the jewelry studio at Haystack

It was been awhile since I have written here: too long, as life is passing me by quickly and the events that necessitate recording are piling up inside my mind. I haven’t written since just before leaving for my Haystack weekend, and suffice it to say, I am more than thrilled that I went and had that experience. I met many incredible people, made many things, learned how to be a baby blacksmith, drank a lot of bourbon, and didn’t really sleep for three days. Not sleeping turned out to be a bad decision as it left my body quite empty and shaken up for almost two weeks!!! No longer am I a woman who can party all night and stay up all day the next day… 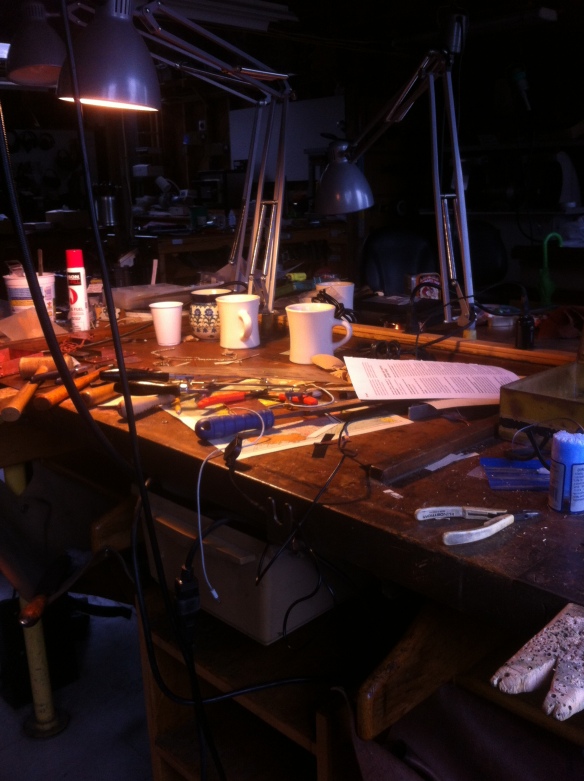 At Haystack, also, the Maine spring was in full force and it was foggy and cold and clammy almost every day, culminating with our last day being downright soggy, slippery, and windy-cold. There are two bridges to Deer Isle: one is a green metal suspension bridge reminiscent of something you’d find in New York, and the other is a low stone bridge made of white stones that stand out in stark contrast to the grey and brown pebble beaches, the amber and golden seaweed, the green fir trees, the blue water, the white boats.

Haystack is a crafts school that was build in 1961 outside the village of Deer Isle, Maine, and sits on the edge of the ocean, on a small bay that is dotted with the fir covered islands so common to Downeast Maine. If you walk down to the bottom of the steps that run the length of the studios, and lean against the railing, you will see birds fishing and swimming in the water before you, some moorings, some lobster buoys, a large island draped with golden and amber seaweed, and many smaller islands laying long and flat along the horizon. If you sit down there at night when the wind is blowing, you will hear the banging of the cleats of the flag against the metal flagpole, and hear loons call their eerie song to you. You will see the nightlights passing through the wooden slats that make up the deck and stairs, and perfectly frame a pair of windy, Arthur Rackham trees that grow up out of the beach and against the bottom railing of the deck. These are the trees that became part of the top of the box that I worked on most of the weekend. The box is made of copper and bronze and a 100 year old lockset with key, copper rivets, and epoxy that covers a piece of paper from an old newspaper, asking the question: what shall we do with our daughters? What shall we, indeed? 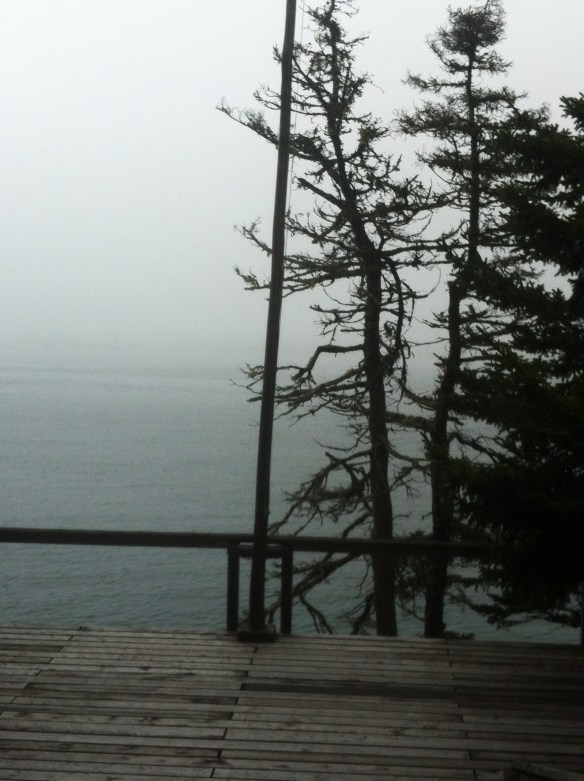 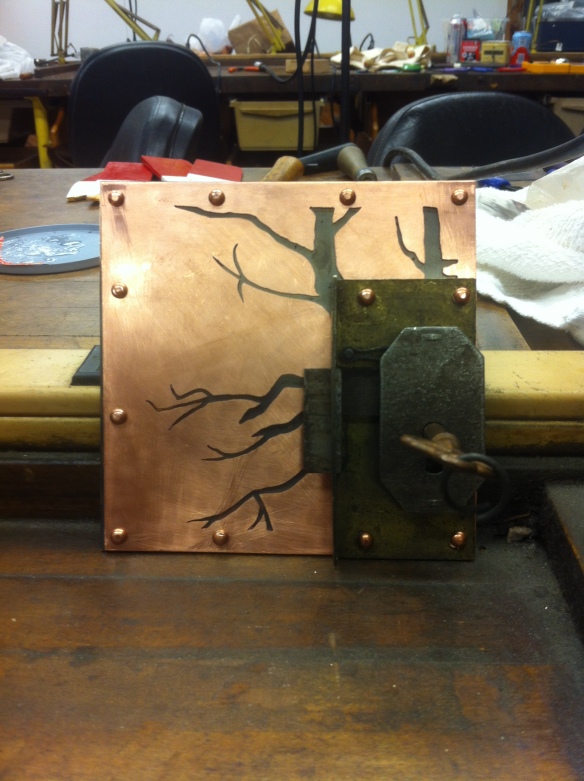 Do you see them?

Haystack helped me understand something about myself: that I crave the night spaces, the dark times, and that I like to work uninterrupted by others. I can work with others, as long as do not have to interact with them very much. The first night at Haystack I experimented with tools like the hydraulic press and their very fancy rolling mill and their many daps and dapping stumps and made a really beautiful, tiny vessel that looks, almost, like an autumn leaf. 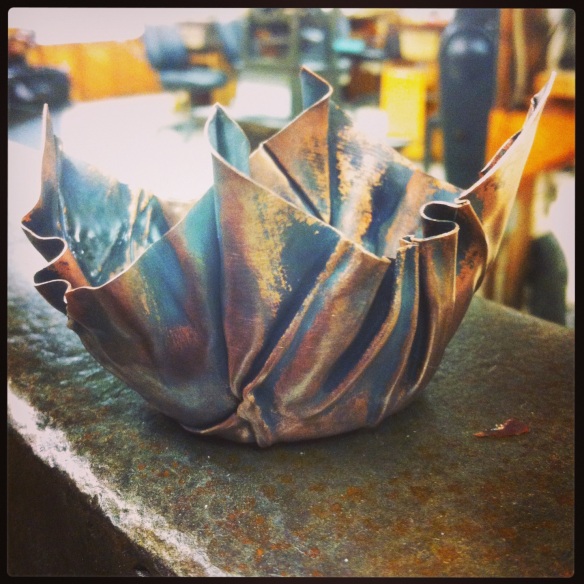 The night spaces at Haystack are what are special: the coolness of nighttime, the sounds of the wind rustling the trees, the glow of orange and white lights out of studio windows. The sound that the sliding door made when I opened and shut it, knowing no one else was there, was immeasurably gratifying. Opening the studio door early in the morning and seeing the blue morning light cascading through large windows, casting the anvils, the tables, the lights, the walls in an eerie, silvery light. The smell of that studio reminded me of my old studio in Austin, but much, much colder, as if the environment that surrounded us on all four sides penetrated the walls, becoming part of the building itself. 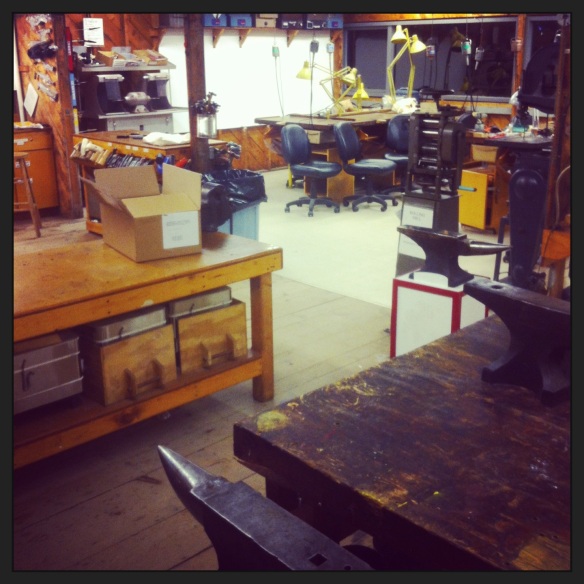 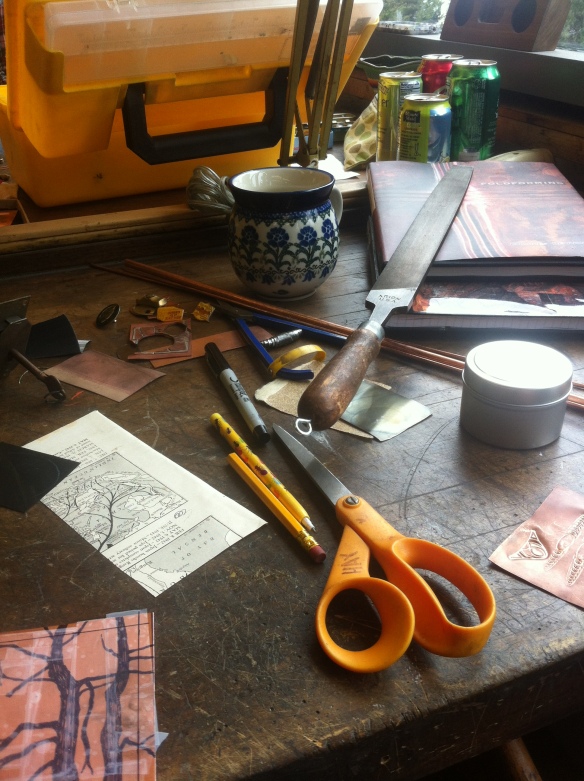 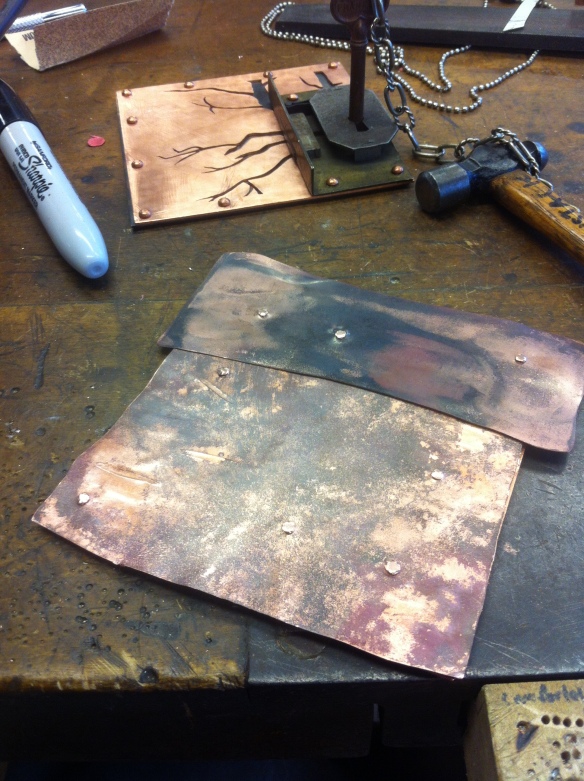 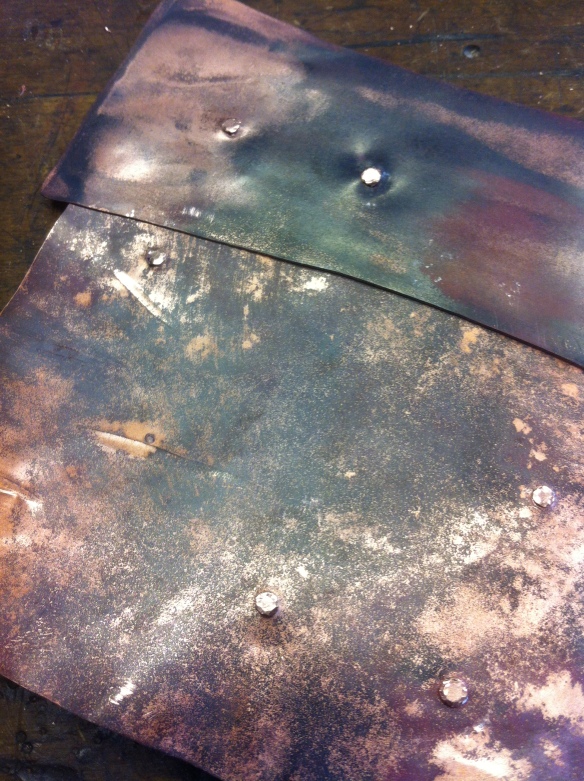 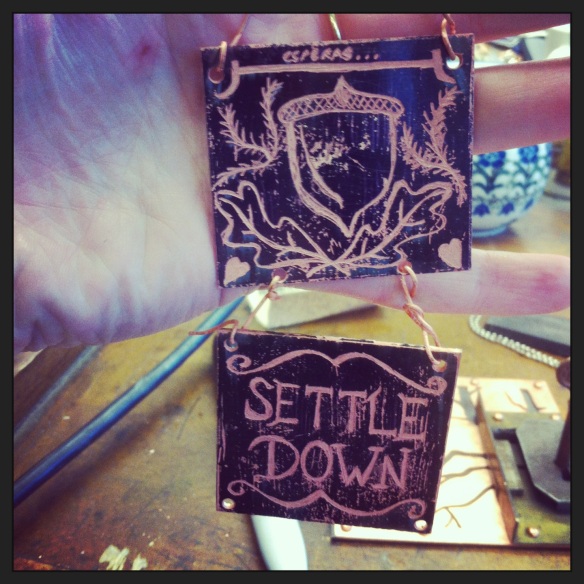 And that is, of course, my experience of life in Maine, that we are literally drawn into and become part of the landscape, and it of us. It is impossible to not be affected by and to effect the landscape, whether it be your footprints on old leaves whilst walking in the woods on a rainy day, or whether it simply be the memory of the way the birch trees with their white and black trunks look in contrast to their lime green new leaves. The landscape is burned into your mind, your heart, your soul, and becomes tied to its ever changing daily face, no two days the same, just like us.

When Haystack Weekend was over, and I was left completely exhausted after not sleeping the last night at all: I was blacksmithing til dawn and then just powered through to work on the box until crashing for about ten minutes at 9:30, my friend and I drove home along the windy roads of Downeast Maine, in the rain, talking about people, laughing about the weekend: making a wrong turn at one point, we ended up almost in Penobscot. The roads from Blue Hill to Deer Isle wind and wind, twist and turn around houses old and new, showing bushes bursting forth with spring color, lobster traps, old cars, hidden in the woods sometimes are even older houses, stone walls, and other mysteries that stay half hidden as the seasons keep rolling by.

It is hard for me to understand that in a few short days it will be the 1st of June, and that I have lived in Maine now for almost one year. I started writing here at the end of August of last year, and have watched the seasons change from summer to fall to winter to spring and soon, it will be summer again. Time keeps marching by, keeping its own pace, and we are simply swimming through, bearing witness to all the changes, small and large, planned and surprising. 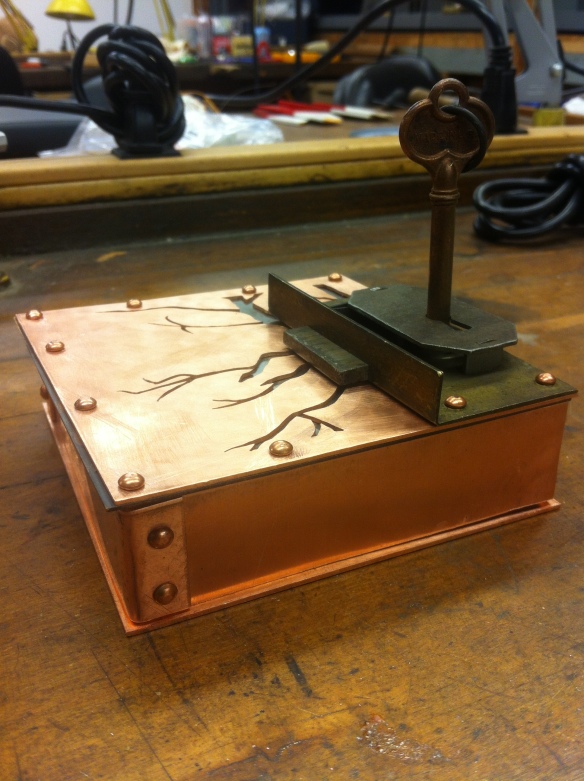