Dreams are funny things: moments of memory that catch in your heart, propelling you through time, or perhaps, fantasy. It’s hard to say.

Ever since I was a little girl, or perhaps ever since I was about 10 or 12, I have wanted the same thing. I have wanted a small house in the country with enough land to have a few alpacas and a couple of sheep. Long ago I decided if I was a very rich lady, I would have one house here in Texas for the winter, and one house in Maine for the summer. One can’t, after all, limit one’s dreams! What would be the point?

The crazy realization came a few days ago when I realized that I am in the process of buying a small house in the country with enough land to have a few alpacas and a couple of sheep. It is a small house in Elgin, and it is made of many bricks and tiles. So many bricks and tiles, as a matter of fact, that it strikes the beholder as a bit mystifying. I don’t really know how all of this happened, being that at this time last month, I was swallowing the bitter pills of attachment, loss, and grief. This month, November, came with a house for me, and……a new studio!!! Who’s to say what turn in the road is ahead; I suppose it is only true that we must continue to walk it.

The house that I am trying to buy is not mine yet, and today I had a very interesting inspection with a wonderful inspector named Travis. Maude from The Big Lebowski kept popping into my mind while I was waiting for him in the backyard, after I had tired of walking around behind him, going “oh my god!!!” after a very significant discovery was made: I kept hearing her say, “he’s a good man, and thorough.” Travis took the full three hours to finish the inspection of this old brick house. He discovered, to our mutual dismay, a crazy amount of termite damage.

That sounds scary, until I tell you the magic and mystery of the Brick House. It is about 98% brick, concrete, and tile. Barely a smidgen of it is made of wood. Unfortunately, we discovered today, that all of that wood has to be replaced. I was a little upset for awhile and even chatted with my partner, Cody, about possible solutions and almost killed him when he suggested welding I-beams together to make frames for windows. I lost my mind when I asked him when the last time he welded was, and he said 1998. It turns out that what Cody was trying to say, in his somewhat mysterious and indecipherable (sometimes) love language, is that he wanted to help me make a beautiful house. When he finally said that, I forgave him and we realized what to do.

Remove the wood! What? You can’t just REMOVE THE WOOD!?!? Oh, but we think that you can, because, as I said above, the house is 98% concrete, brick and tile. It has no wood framing, but is made entirely of bricks and concrete bricks. It has a concrete ceiling for crying out loud. The only wood in this house is in the trim work: the door frames, the window-frames, and the doors. No big deal. Our idea was borne from beautiful homes with arches like these ones (yes I realize these homes have wood in them): 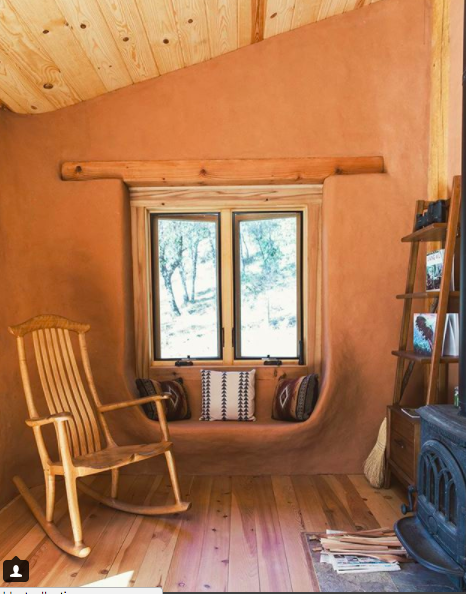 The above three images from the wonderful Instagram – Gold Dust Collective

And we soon realized that all was not lost, and just because you can pull apart the door jambs in this house with a set of, I don’t know, tweezers, hope springs eternal in the creative brain. The plan is to pull all of the wood out, and re-sculpt the trim areas with concrete stucco, a la Southwestern houses shown in many stunning architectural magazines. After all, who says that all door frames have to be rectangular?

Tuesday I have another inspector coming, an engineer this time, and the, ahem, termite guy. If the engineer gives me the go ahead, and that we have structural integrity despite the efforts of termites, I will move ahead into the land of alpacas, sheep, stucco and a giant garden with lots of flowers. I have decided that the owners have to pay to drop a termite treatment of sizeable proportions onto the house before I will buy it. After all, I can’t be *that* crazy.

November: your soil is a-turning and what it is releasing is very interesting. In the back of the property today, in the overgrown back-40 that I learned used to be a horse pasture, we found an old tractor. Turning the soil, indeed.

1 thought on “An Ode to Termites: or, the Flexibility of Dreams”