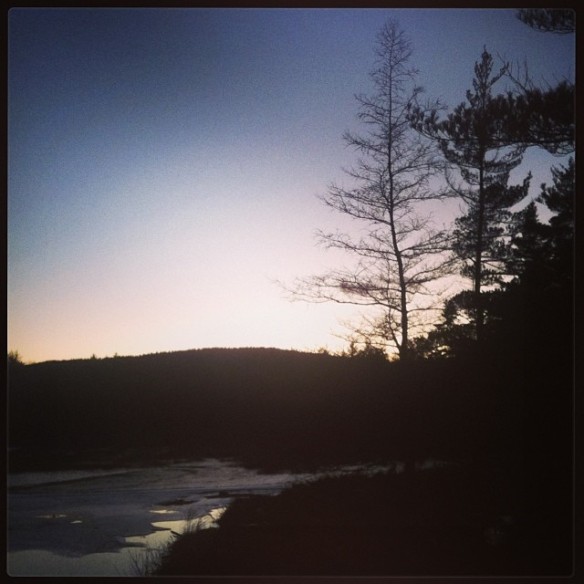 Today I went on a sunset walk with a friend. As we walked, the light changed from gold to blue and then became complete darkness, lit by a gibbous moon that rose quickly over our heads, to hang in the sky, over the path, back to a bridge over rushing, snow-melt water.

She joked that if we were caught in the dark that we would be eaten by wolves, and just after the sun disappeared, we heard their calls just off to our right, in the woods. Yipping and howling together, it was no doubt a group of coyotes living large in the forest. Their calls waffled between high-pitched, human-like screams and howls, and seemed to be very close to us.

She grabbed a large stick from the side of the path and we formulated plans including climbing trees and calling for help and standing on the bridge and making ourselves larger than life. The moon, luckily, lit our way with its white light: shining down on snow and ice.

As we walked, a bit faster now, we saw the first one as it leapt across the path in front of us: a black streak with a long tail. We stopped, dead in our tracks, not knowing what to do as coyotes will circle people and dogs in the woods. It was then that we saw the second coyote run across the path, just a bit farther down than the first one.

Grasping each other and the stick, we forged on, beginning to yell at the coyotes to scare them off and looking back to see if we were being followed, but we weren’t. They simply were there when we were, and we were lucky enough to not be very interesting to them.

As we reached the stone bridge, the one that we had crossed earlier while staring down at the stream, full of roiling waters and lined with rocks, we breathed a sigh of relief; we were within eye shot of the car, and therefore, far enough away from the coyotes in the forest.

It is a magical and sometimes unnerving thing to live in nature; this place has very little separation between the wild and the domestic, outside and inside. In the times when the light fades, at the end of another winter’s day, and you find yourself in the woods, walking along with a friend, it feels better to walk softly and carry a big stick.

“In every walk with nature one receives far more than he seeks.”